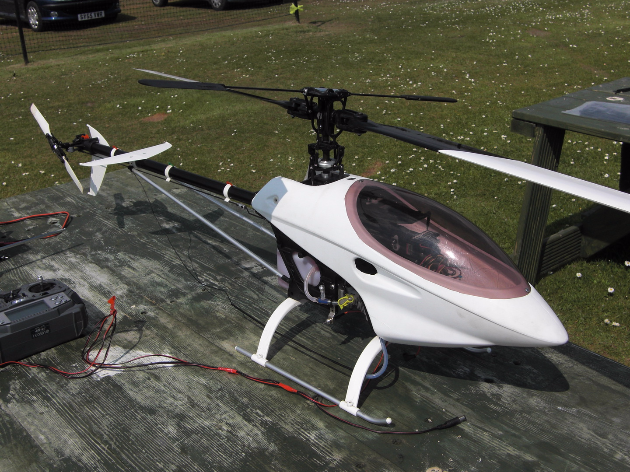 Picture of my Thunder Tiger Raptor 30 after about 6 months of owning it - - Still a good looking bird now!

Gyro: Originally a crap CSM 180 rate gyro but ended with a Spartan DS760 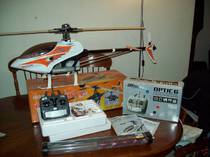 Bought second hand off ebay but was never used this was my first proper helicopter that I learned my skills on and pushed me to continue in the hobby. I purchased this from a newbie who had spent the time to build it, however both him and myself clearly didn't know what we were doing as we never got off to a great start - Basically it was that saying "All The Gear But No Idea".

As much as I tried I just couldn't get it to take off but help was on the hand at my local club.

*The Picture to the right was taken from the original ebay advert - you never know it could of been you that sold it. 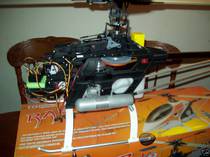 I contacted my local club and met with a young man who check over the heli, fixed it and set everything up. It was now time for me to put the hours in both on the simulator and at the flying field.

A few months went by but i having having the same issue repeatedly - the engine! Didn't matter how much time I or others spent adjusting needles on the carburator it would randomly refuse to start. I would have to strip and rebuild it at the field every single time, needless to say it very quickly become more than just annoying. Looking online it was a known problem with Super Custom engines but by the time I found this out I had out grown the power of a 30 sized engined helicopter. 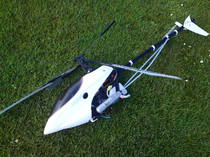 Due to the fact I knew I had my next 3D helicopter coming i was pushing the Raptor 30 hard and beyond what it should really be doing, when I needed power to pull out of a situation that I got myself into.....it was full throttle but nothing other than the sound of a bogged down engine - Crash!

To be fair there wasn't as much damage as I thought there was going to be but still with all good things it was time to retire the raptor and move onto something with a little more power and faster responding servos. Even now I still own the Raptor 30 however its still in exactly as the same condition as the picture on the left, its kind of like your first car. You become close and down really want to part with it, maybe one day she will fly again at the Scottish Helinats as an antique for a demo flight.