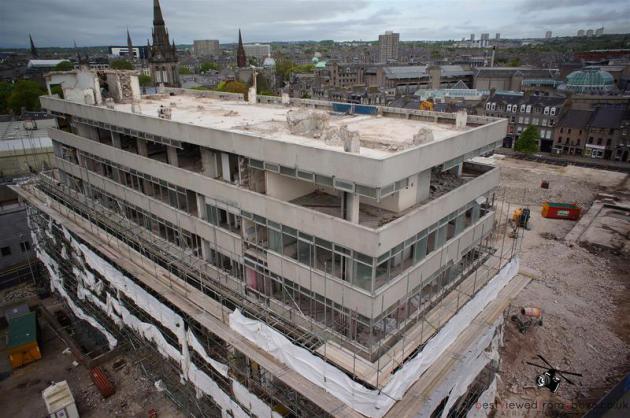 St Nicholas House sited in Aberdeens City Centre was Aberdeen City Councils Headquarters for all administration staff from 1968 until 2012 where all 1,100 employees moved across the road to the beautiful renovated Marshall College.

St Nicholas House Consisted of 14 storeys and because of its close proximity to Provest Skene House and other buildings there was no way that demolition could envolve explosives. After a tendering exercise none explosive demolition was awarded to Safedem where once surrounding groundworks were complete would begin bringing St Nicholas House tower down floor by floor using remotely operated vehicles. This would take around two weeks per floor and was expected to be completed by Spring/Summer 2014. However Asbestos was found which caused delays and further to this severe weather conditions hit Aberdeen during early 2014 delayed everything again.

Once demolished a £107 million pound civil square project will start bringing in new shops, cafes and office blocks which will help bring out the best of both Marshall College and Provest Skene House.