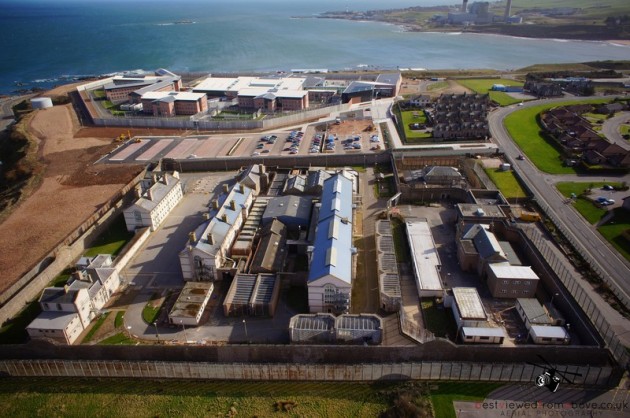 Aerial pictures of the now closed HMP Peterhead prison which was built in 1888 and designed to hold a total of 208 prisoners however during its peak it was reported that there were 455 inmates, due to this additional buildings were completed in 1909, 1960 and 1962, bringing the official capacity up to 362.

In recent years the prisons main inmates were those who carried out crimes of sexual natures and its rehabilitation programs had won awards not only in Scotland but in Europe however due to being built during the Victorian era it was beginning to get run down and had a history of having poor conditions for the prisoners. A 2005 inspection reported that mould was found in most areas of the prison and that electricity had only just been made available in all the cells.

In late 2013 the prison closed its doors for the last time and along with Craiginches Prison in Aberdeen is being replaced by the new HMP Grampian sites just 100 metres from the old prison. The first inmates transferred on to site on 2nd March 2014 after having been temporarily housed at other sites within Scotland.

On 28 September 1987 a riot in D wing Peterhead Prison resulted in prisoners taking over the building and taking a prison officer Jackie Stuart as hostage. The rioters were serving life in prison for violent crimes and It was thought that they had nothing to lose so wouldn’t hesitate to make good on their threats to kill their hostage who could be seen at times on the roof. When negotiations broke down after five days the then Home Secretary Douglas Hurd dispatched the SAS to bring the riot to an end.

An SAS team arrived in Aberdeen from there base in Hereford on board a Hercules C-130 complete with all the equipment and armoury required, driven to Peterhead and briefed by Police commanders within the prison gym where no one else knew they were even there. Armed with wooden batons and standard issued browning pistols they simultaneously stormed each floor using explosives, flash bangs and smoke grenades where within six minutes had all prisoners tied and Jackie the hostage freed.